Learning to Drive in Nicaragua 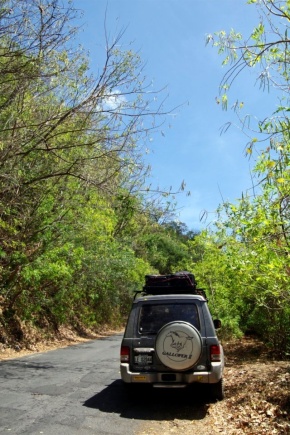 I’ll begin this post by saying that I am no expert in the subject of learning to drive in Nicaragua.  We bought our truck a month ago and even though we rented vehicles while vacationing in Nica, we only used them to go from one city to the next.  Even now that we live here Elisha and I only drive the truck when we make our once a week trip to the Maxi Pali supermarket or when we go on the occasional road trip.  I should also be forthright about who the actual driver of the vehicle usually is – Elisha.

You are probably wondering why I am I one writing this post.  Well, to be honest Elisha asked (i.e. told) me to and as some of you already know my moto is “Happy wife, happy life”… so here I am.

Driving in Nicaragua is not for the feint of heart.  It’s important to stay focused at all times.  In my opinion distracted driving laws really aren’t necessary in Nicaragua because if you become distracted while driving you wouldn’t make it 5 minutes without causing an accident.

On any given road you will encounter cars, trucks, busses, ox carts, horses, bicycles, motorcycles, pedestrians, herds of cattle, chickens, dogs, kids selling iguanas for meat and let’s not forget – the police.  All will be moving unpredictably and at various speeds – except for the police.  They will be standing at the side of the road waiting to see if this roadway circus causes you to step out of line.  Once you do (and you will) it’s pretty much a guarantee that they will be there.  This is especially true at the entrance to any town and most certainly so near the airport.  I’m not sure if it’s more feeling than fact but it would appear as though the local police are set up in places where it’s that much easier for them to extract money from you.

The ticketing system in Nicaragua is interesting.  Generally the police will write you a ticket for an infraction and the costs is usually around 200 cordobas, which is just under ten bucks.  They will give you a copy of the ticket and keep a copy for themselves while attaching a copy to your license which they keep.  When their shift ends they will take your driver’s license (and any others they have collected) to the police station where it awaits your visit.  For your fun and excitement you must take a trip to the nearest bank to pay the fine and have your your ticket stamped.  You must then return to the police station of the town that issued the ticket to pick up your license. You have 15 days to do this or I’m not sure what, but I suspect it’s probably a lot less fun.

We have a friend who lives near Granada. When he gets a ticket he simply waits the 15 days to pay it and proceeds to drive without worry of receiving additional infractions during that period of time.  When the police ask for his license he shows them his pending ticket and he’s free to go.  It seems as though additional tickets are not issued when you already have one and with no license to threaten to take they have no bargaining power over you.

This ticket paying process isn’t terrible unless you are only passing through a town.  In this case you would need to make a special trip back there to retrieve your license.  I’m quite sure there is a possibility that the police understand this all too well.  In all of our travels in the past three months luck has been on our side and we’ve rarely been pulled over.  The couple of times we were no tickets were issued.  That all changed when our friends came to visit and we were traveling with luggage on the roof rack. It seems as though this is the symbol of a foreigner on a road trip.

During the two weeks we spent traveling with our friends we were  pulled over 3 times.  The 1st infraction occurred just as we were leaving Leon.  Elisha made a left hand turn across two lanes instead of one.  When she realized what she had done she immediately moved into the correct lane.  Even though no cars were near and she caused no issues this slight oversight was the result of not one, but two infractions.  One for the improper turn and one for an improper lane change.  According to the book the fine was 600 cordobas or if we paid the officer directly it would be 400 cordobas. Luckily we were able to settle on 200.

The next infraction was really weak.  A slow moving car applied the brakes and made a right hand turn into a driveway.  Elisha signalled and went around him as he pulled in.  Because she crossed a solid yellow line the police officer stepped out onto the road about 100 meters up the highway and motioned for use to pull over.  He gave us a long drawn out lecture about driving safety. To avoid the hassle of paying at the bank he was gentlemanly enough to allow us to pay our 200 cordoba fine directly to him.

The 3rd infraction was almost too much to take. Coincidently about 5 minutes from the airport we were pulled over after we drove through a traffic circle.  The police officer wasn’t even looking in our direction until we were driving past and then he walked out toward us.  He said that we lane changed in the traffic circle without signalling.  This was very far from the truth and even if it was  he would not have known anyway because he wasn’t even looking.

I got out of the truck and told him the ticket was a piece of shit.  He said it wasn’t.  Then I told him that he was a piece of shit. He didn’t agree with that statement either. I then proceeded to tell him I didn’t have time for his games and tried to push some cash into his hand. He started yelling at me and instructed me to get back in the car. I thought maybe I had really pissed him off and pushed a bit too far so I did as I was told and got back into the car. I looked over at Elisha to tell her this might be bad, but I didn’t have the chance.  The cop was standing beside her window with his hand in the truck waiting for the cash.  Apparently the only thing that upset him was my uncultured attempt to bribe him in plain sight. I guess I still have a lot to learn about driving in Nicaragua.